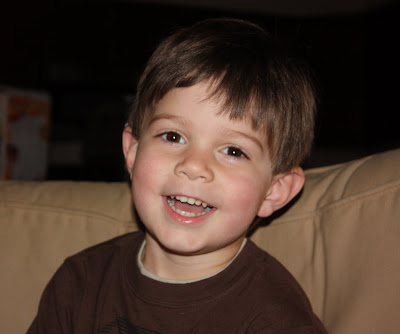 Can I tell you how BLESSED we are to be the parents of this little man?!? David is by no means perfect, but he is growing up so much and seems to have come out of a rough spot in regards to discipline, complaining, and obeying. Although all the trials were typical, he is in an amazing place right now. He tries so hard to obey us, is patient and generous to his brother, thinks of others, and is just geniunely a fun person to be around. I wanted to document a few "David stories" that I wouldn't want to forget in the future:

*He is very auditory. He can hear songs on the radio and attempt to guess the artist if it is someone he listens to often. Also, he knows almost all his letter sounds. The funny thing about that is that I rarely work on it at home and he identifies the letters by the sound that it makes as opposed to the actual name of the letter. He makes voice connections as well, a few weeks after he saw School of Rock he came downstairs one morning and said that he knew the guy on that movie sounded just like Kung Fu Panda. What a funny thought at 7 am!
*When I ask David to do something he sometimes whines about it, but for the most part he will think through his response and smile with the following statements: "I certainly will!" or "sure, mom!". Cutie!
*He loves, loves, loves, Jonathan. They have begun to argue over toys occasionally, but that is only when David doesn't turn something immediately over to Jon. He usually shares with his brother, is the first one in the room when Jon wakes up, and tickles him with kisses every morning!
*David is still the entertainer at school (see previous post about his performance of Macho Man during class).
*David LOVES having Wellspring meet at his house every other week. He knows his days of the week so he counts down to when his friends come to play and when "daddy talks to all the other people downstairs" :)!
*He can navigate the computer very well and loves Starfall.
*He loves to rock out to One Way Jesus (by Hillsong) and is still a big fan of The Killers, Jack Johnson, and The Rolling Stones.
*He eats and eats and eats... some days I can't seem to get the kid full! He doesn't eat as healthy as his brother but man does he eat! His favorites right now are eggs, turkey bacon, vegan pancakes, chocolate chip cookies, homemade pizza, and popcorn for a treat.
*He loves to cook with me and we make pancakes together almost every weekend!
*He memorizes scripture easily and I really think that learning God's word has helped him control some of the earlier mentioned behavior.
*He still has the most joyful laugh! 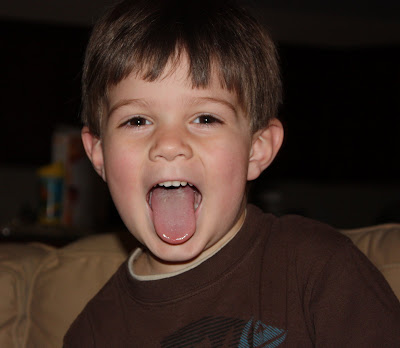 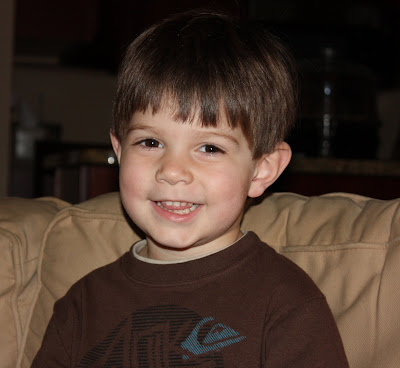 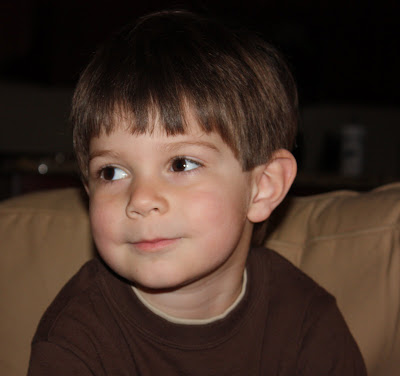 Is it Monday Tuesday already?

* I hesitated to post this, however I had it ready and want to link you over to MckMama's blog. Her infant son Stellan is very sick and in need of lots of prayer! Please remember him when you spend time with God this week.*

I did not spend my week attempting to get ahead catch up on all things house related. However, I sit here on Sunday night and still feel like I have a to do list that is a mile long...

I did not have the first experience of giving David discipline (a spanking) and then him look at me and candidly say "But that didn't hurt!"... let's just say that from now on his pants will be around his ankles when he gets discipline, public setting or not!

And since we are on the subject of my wonderful 3 year old, David's teacher did not pull me over in car line to share a story with me from their day... apparently David knows the words to Macho Man and serenaded his entire class while doing his table work. His teacher said he sang as if no one else was even in the room!

I did not take Jonathan to get his hair cut and almost CRY when the sweet lady was finished... I specifically told her NOT to cut it blunt across the front and she obviously listened intently ignored me!

My boys were not covered in yellow/green pollen when we returned from our afternoon outside play time... and the pollen does not leave Trey and I feeling like we have been hit by a sinus infection 24/7.

When we visited the local indoor jump place with some friends, I did not allow Jonathan to go down the biggest slide all by himself once he showed me he could actually climb to the top of said slide alone... 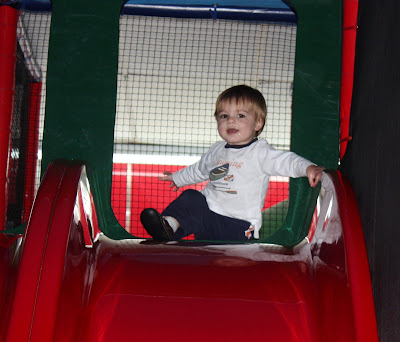 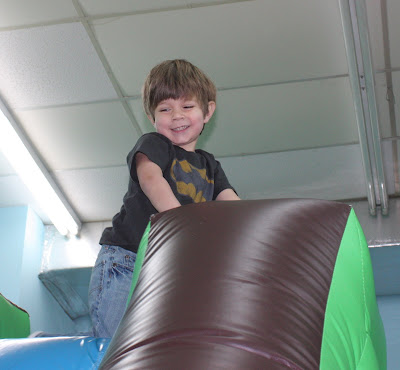 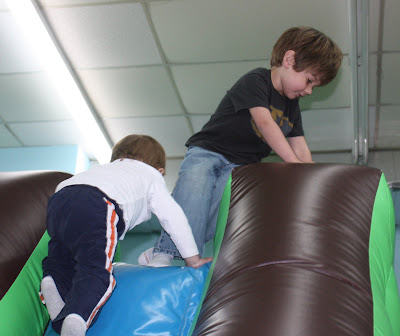 and I also did not have just as much fun as the boys joining them on the slides Jonathan couldn't climb. By the way, David just started going inside jumpy things like these... but Jonathan is a crazy kid! He LOVES it!

In an effort to get me back in the habit of blogging, I thought I'd get on board with one of my favorite blogs and take part in MckMama's Not Me Monday! She claims it is free therapy and I get to remind myself that God's mercies are new everyday and I am thankful for His grace!!! It is pretty simple, everything I list is stuff that I did not do (said sarcastically!) this past week and would never, ever do again and again...

I most certainly did not allow Jonathan to eat Cheerios off the edge of a chair for breakfast because he threw a raging small fit to not sit down due to a little diaper rash he has. Then, I did not stand by with my camera just taking pictures of him dropping said Cheerios on the floor, mixing them with last nights stash that I did not sweep up off the floor. That would never happen in my always sometimes clean home! 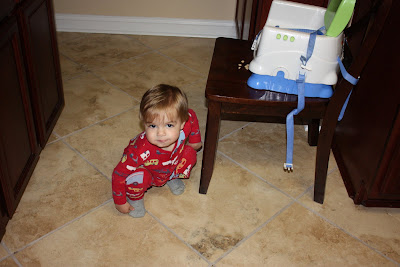 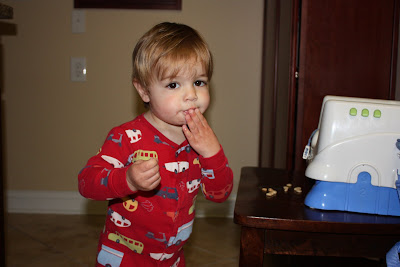 I do not allow my boys to rough house until one of them gets slightly hurt just so they will learn how far they can go. Who would do that?!? (Hope, notice the tent? They LOVE it and have since that first Christmas!!!) 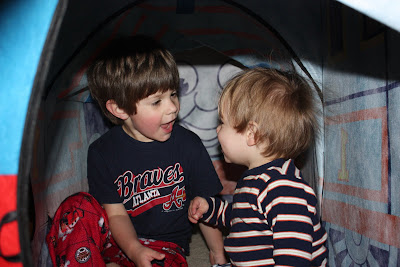 I would never allow my 3 year old, David, to "go commando" when ever he wants at home, just because he likes it! That would teach him things his future wife would hate me for :)!

Jonathan did not get at least 4 morning baths this week... and by morning I mean early, before school kind of baths that are completely necessary due to what I found when I went to wake him! Hence the diaper rash...

I most certainly did not spend quality time with my boys this week teaching them to do laundry. Jonathan did not get resourceful and find a stool so that he could better reach the washing machine to help throw in all the clothes. Who teaches a baby and preschooler to do laundry?!?

I am not admitting here on my blog that I am 100% addicted to sweet tea! I do not crave it with every meal and would never strap my kids in their car seats to drive through Zaxby's, order a large sweet tea, and proceed to drive around while drinking that sugary concoction in peace!
Posted by Danielle at 5:14 AM 7 comments:

Yep... you need to go to this site! Our church website is finally up... we are so excited! Please tell everyone you know to take a look around and if you live in the Myrtle Beach area we hope you'll check us out soon!
Posted by Danielle at 10:36 AM No comments:

sums up the day at Wellspring! God is so good and we are humbled to be a part of what is happening in Myrtle Beach. Check out Trey's Sunday Thoughts on his blog. Amazing!
Posted by Danielle at 7:05 PM No comments: